Kentucky higher education matters: The Council's most recent study shows how a college credential benefits both the individual student and the state as a whole.

What is higher education in Kentucky? 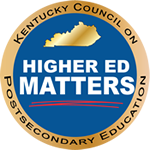 When most people think of higher education, they think of an 18 year-old heading off to a university, living on campus in a dorm, going to school full-time for four to five years. However, Kentucky has many options outside of that assumption that fall under the category of "higher education." These can be an adult enrolling in an online degree program part-time, a high school graduate participating in an apprenticeship program or a student pursuing a technical certificate or associate degree at a KCTCS college.

To learn more about the depth and breadth of Kentucky's higher education institutions, view the Council's inventory of institutions:

Benefits of higher education in Kentucky

Those with a college degree earn more than high school graduates.

At the end of eight years, those with a bachelor's degree were earning on average $12,000 more than high school graduates. For associate degree holders, it was $8,000 more. Our research takes into consideration that many college students work while in school, which accounts for the lower levels of income in the graph below. However, once college students graduate within three to six years and begin working full-time, their earnings increase at a much faster and higher rate than a high school graduate.

Earnings based on major

In general, individuals majoring in high-demand health, STEM and trades earn higher starting salaries than those majoring in the arts and humanities and social sciences. However, numerous national studies have shown these differences narrow over time. 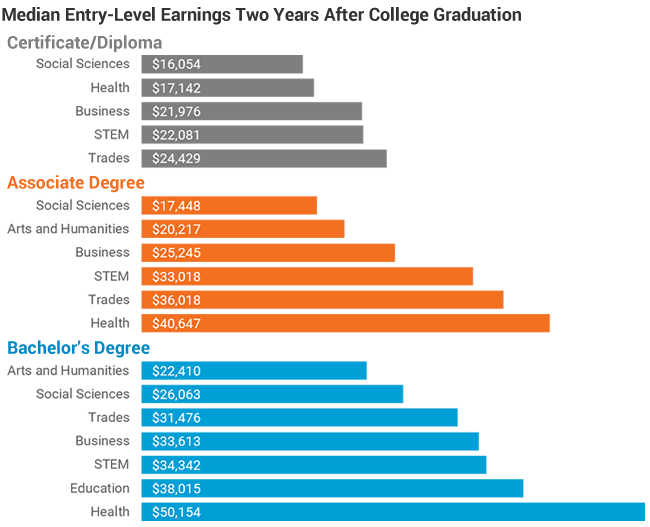 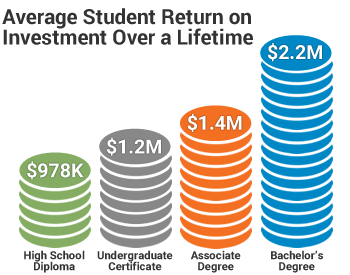 Earnings over a lifetime

A true investment amount takes into account total out-of-pocket (net) cost of a college education, as well as the income lost as a result of attending school. Even taking into consideration the cost to attend college, lost earnings and possible student loan interest, college graduates have a greater return on investment over a high school graduate.

Over a lifetime, a bachelor's degree graduate earns $1.2 million more than a high school graduate, even after taking into account deferred entry into the workforce and the cost for a college degree. Associate degree graduates earn $422,00 more once these factors are taken into account.

The state's return on investment for one cohort of college-goers is $42.8 billion, or 68 times the initial investment. 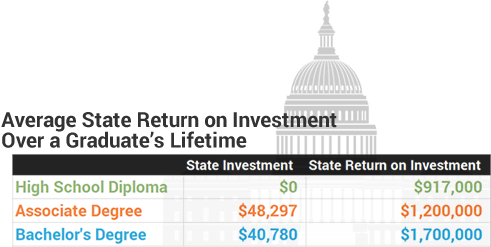 Kentucky invested about $544 million in the cohort through General Fund appropriations to public colleges and universities, and another $86 million through financial aid, which is funded by lottery proceeds. In exchange for this $630 million state investment, the cohort will contribute nearly $43 billion to the state economy through taxes and spending over a lifetime. That is a return on investment 68 times over.

It should be noted that General Fund appropriations for public colleges and universities were reduced 18% during the period of this study. These cuts have shifted more of the financial responsibility for college onto students and their families. As a result, college affordability suffered.

A college-educated Kentuckian contributes to, rather than burdens, the state's economy over a lifetime.

College graduates are much less likely to receive unemployment insurance or participate in entitlement programs. In 2017, 85% of those Kentuckians who were unemployed or out of the labor force did not have a college credential. Residents without a college credential accounted for 88% of SNAP recipients, 86% of Medicaid recipients and 94% of SSI (disability) recipients.

Overall benefits of higher education to the state and individual

(Not included in the Kentucky Higher Education's Return on Investment Report.)

Source: Recovery: Job Growth and Education Requirements through 2020. Center for Education and the Workforce, Georgetown University.

Source: The College Board.